"The Lead of Notre Dame"

I am interested in the symbolic relationships between gothic symbols, alchemical elements, human suffering, and environmental destruction. I will attempt to create a personal mythology by transforming lead into a symbol of destruction through the process of fire.

Last April, a violent fire seriously damaged Notre Dame de Paris’ Cathedral, a symbol of European collective memory. Its roof and its spire containing 400 tons of lead tiles have been spreading millions of lead particles all around the city. The amount of lead around the site has been diagnosed 60 times over the standards and 1000 within the church. The French authorities have given priority to the cathedral reconstruction and budget (1 billion) instead of protecting the health of thousands people and especially the builders reconstructing the cathedral.

Lead is a turbid, soft, heavy and poisonous material. It can be inhaled or swallowed. It has disastrous consequences on human body and generates “Saturnism”(in the middle ages it was believed that the lead came from Saturn). This disease is impacting cognitive and mental development (tiredness, memory, attention, headache, abdominal pains). The lead and Saturn have the same alchemical sign and are allegories of time (Saturn the etymology of Saturn is Chronos, the god of time in ancient Greece).

I am investigating the route of lead pollution from the church's tiles, to the fire, to the atmosphere and finally to human lungs and its long-term impact. I am attempting to make lead poisoning visible.

Starting from the Notre Dame de Paris traumatic event, I am interested in creating a personal mythology by transforming lead into a symbol of the destruction of history and human body. The connotation of lead and fire includes death, time, transformation and destruction.

The tryptic of lead transforms lead into a symbol that mediates the lead poisoning from history to the human body to the present.

This tryptic is made out of three thin sheets of lead 20x30 cm and framed by lead as well (usually used for stained glass). 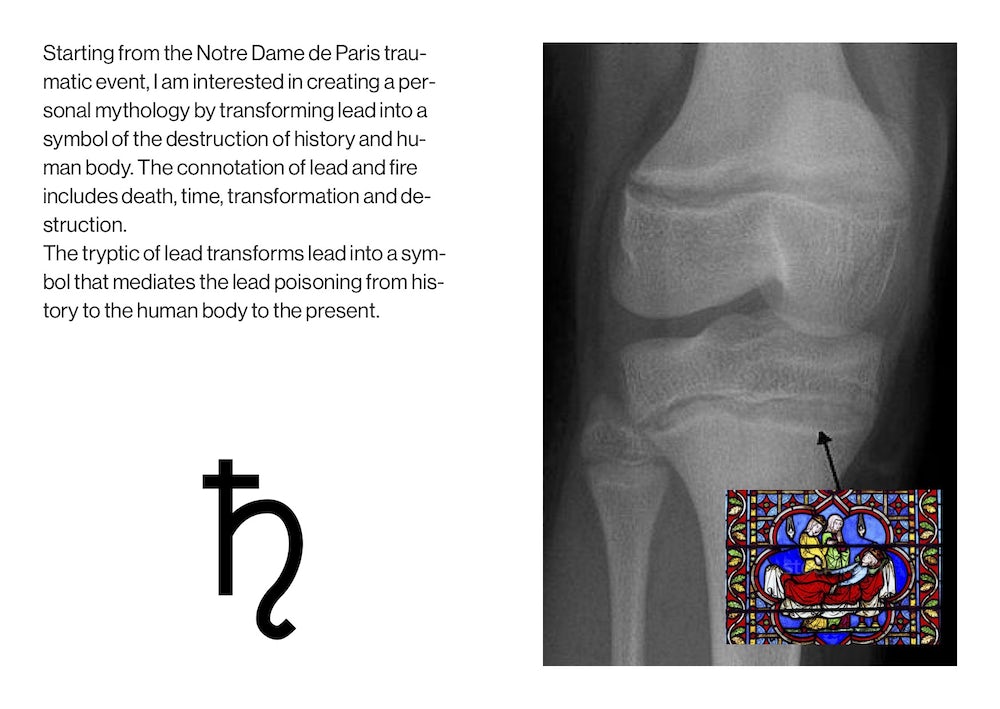